Are Kate Middleton and her Royal Baby Jewish?

According to Alan Dershowitz the Royal Baby’s Jewbellish Score is pretty high:

– His great bubby and zaidy were Ronald & Dorothy Goldsmith. – 3 points
– His father is already starting to go bald like a Brooklyn accountant. – 1/2 point
– There is a street in Israel called ‘King George’. – 1/2 point
– His bubby from his father’s side, Princess Diana, is the biological daughter of Sir James Goldschmidt. – 2 points
– If little George has a Mohel perform a ‘royal cut’ – 3 points
TOTAL JEWBELLISH SCORE FOR THE ROYAL BABY: 6 POINTS (or 9 POINTS W/ CHOP) 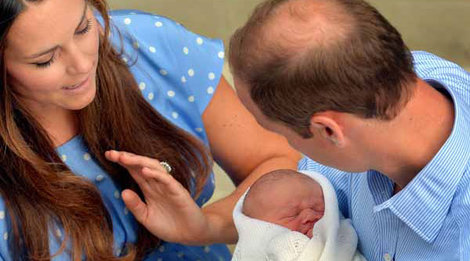 As reported in the Algemeiner by Simcha Weinstein

Mazel Tov! After much anticipation, at 4:24 p.m. in London on July 22, the Duchess of Cambridge gave birth. The Royal bundle is an 8lbs. 6oz. son, future King — and perhaps a real Jewish Prince.

For those of you who haven’t heard, according to lawyer Alan Dershowitz, Kate’s mother, Carol, is the daughter of Ronald and Dorothy Goldsmith (whose parents, he claims, were also Jews).  The Jewish line may thicken with hubby Wills. It’s been speculated that the late Princess Diana’s mother, Frances Shand Kydd, was born a Rothschild. If that weren’t enough, the London Daily Mail reported that Diana is actually the biological daughter of Sir James Goldschmidt, also a Jew.

Royal ancestry-mavens consider all this hearsay, but between William and Kate, chances are some Jewish blood runs through the bluish.

In fact, the new heir was born in a “Jewish” wing of St. Mary’s hospital. A Sephardic Jew, Frank Charles Lindo, paid for the wing in 1937!  He must be shepping some nakhes!

From the day it was announced that the royal couple was expecting, reporters, photographers, and people on the street went wild! How ironic, I thought. In an atmosphere of zero or low population growth, where having more than 1.5 (I’m not a statistician) children are often met with frowns from those who count carbon footprints, this arrival was met with a fervor rivaling the coming of the Messiah.

True, the babe will insure the family business continues for at least the next few generations and, according to Jewish Law, this is critical. In Jewish tradition, we have tremendous respect for government and authority. In the Talmud, Rabbi Chanina teaches: “Pray for the security of the government, for were it not for the fear of its authority, a man would swallow his neighbor alive.” As a child growing up in England, I can still recall special blessings for the royal family, for to have the utmost respect for royalty allows one to recognize the ultimate kingship in this world.

And the people are feeling it. One man who waited outside St. Mary’s hospital for 12 days, said: “We’ve got a lovely married couple and baby will make three — and they will be a family.”

King Solomon, who was called “the wisest of all men” for a reason, used the analogy of a threefold cord: “Though one may be overpowered, two can defend themselves. A cord of three strands is not quickly broken.” He reminds us that a one-strand cord is weak by itself, a two-strand cord is stronger, and a three-strand rope is stronger than either. Children, create a threefold cord.

True, unlike most newlyweds today, the Duke and Duchess of Cambridge don’t have to worry about finances, debts, child care, or university. Ever since Kate, who stems from the tiny village of Bucklebury, became the new fairy tale Duchess, she’s become the “IT” girl of the century, and she’s a “hit.” Modern, educated, and hands-on, everything about her becomes “trendy.” So, let’s watch the birth rate!

The national and international mood is soaring at this mind-blowing and mind-changing event and I can hope that the royal blessed event will make having children a “hit” once again.

Rabbi Simcha Weinstein is a best-selling author who recently was voted “New York’s Hippest Rabbi” by Channel 13 in New York. He chairs the religious affairs committee at Pratt Institute, and recently published the book, “The Case for Children: Why Parenthood Makes Your World Better.”