The creator of a popular new diet has been issued a notification of excommunication after Rabbis ruled that her dieting methods were “hedonistic and disgusting.”

Cheryl Mitchkoff is a food blogger who invented “the snowman diet: a healthier version of Atkins.” The diet encourages practitioners to eat a snowman every meal, and nothing else.

“Three snowmen a day equals zero calories,” gushed Mitchkoff from her padded room in the anorexic recovery centre of Oregon. “Well, unless if you use chocolate chips for eyes.”

Mitchkoff claims to have lost 100 pounds in four weeks. “The most difficult part was during the three days of sun,” she added, giving a weak thumbs up. “It was then that I decided to drive north and prowl.”

Rabbis were alerted when Corey Farbman, a 5-year-old child, woke his mother at 3:00 in the morning, sobbing in terror. “He told me that a monster was eating our snowman,” said Corey’s mother, Rachel. “I opened the window to show him that that he had been dreaming, and there was Mitchkoff, cannibalizing our snowman like a she-demon.”

Mrs. Farbman called her Rabbi, and soon discovered that many of her neighbours’ snowmen had also been eaten. “We found Harry – our sodomized snowman, in the Synagogue garden,” cried Mordechai Neinstein. “And there went our Minyan.” Neinstein later explained that the congregants of Beth Mazeltov Shabbat Shalom Abi Gezunt (a conglomeration of several reform Synagogues who merged in the 1930s) would often place a prayer-book in the snowman’s twigs and thus count him as the tenth man. “Now how will we say Kaddish? Who will be our tenth man?” Asked Neinstein before another problem dawned on him. “Wait, how will we say Kaddish for Harry?”

Mitchkoff was brought before the Council of Beardless Rabbis, who were outraged at her thievery. Rabbi Meshulem Rothsbrecher, a Rabbi known for his controversial ban on avocados (which he claimed “can psychologically traumatize a child for many years, when his mother tries to force him to eat some with his Gefilte fish”), was particularly furious. “A woman? Touching a – a man? EATING this man?” Shouted Rothsbrecher.

“What’s going to be next, marrying snowmen?” Added Rabbi David Schnorgelovitch. “I remember when this immoral society started, back when my ex-wife Phyllis lost my favourite pair of underpants in the ladies Mikveh!”

Rabbi Herz Van Hire, a Kabbalist, was so upset at the news that he decided to sit outside in the snow for three days. However, several days later his students discovered that Rabbi Van Hire’s fedora and long coat had been placed on a snowman, and the Rabbi was later spotted teaching in his Yeshiva with a severe tan.

However, Mitchoff asserts that there is nothing wrong with her snowphilia. “This is a white blood libel,” she claimed. “Nowhere does the Torah state that one may not eat snowmen. The only harm that ever came from eating snowmen is that one time when I ate a yellow torso and had diarrhea for a week.” 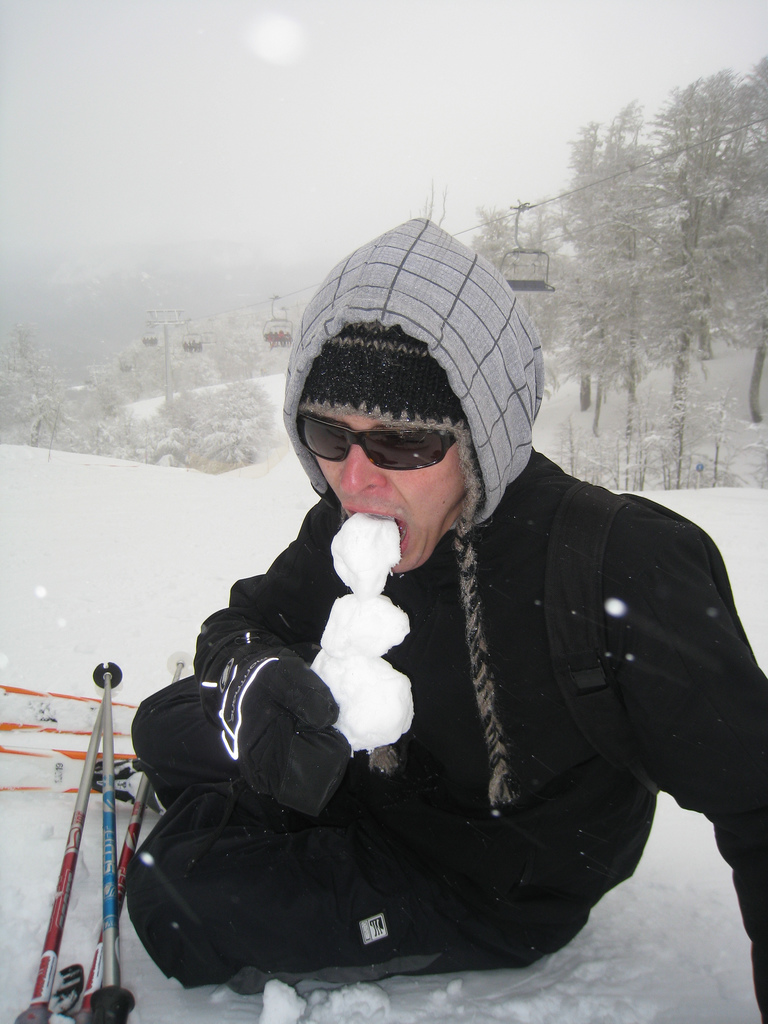