Not many people know this about the 7-foot basketball star, but his Jewbellish score was pretty high! Watch this 8-minute ESPN documentary about his start in the Borscht Belt >>

In 1954, before his senior year of high school, Wilt Chamberlain took a summer job that would change his life. He worked as a bellhop at Kutshers Country Club, a Jewish resort in the Catskill Mountains. By day he was making 2 dollars an hour and getting great tips from the awestruck guests as he lifted their luggage through a second floor window while standing outside on the ground.

At night, he played on the Kutshers basketball team and was coached hard by the resorts athletic director, the soon-to-be legendary Red Auerbach. Mixing rarely-seen archival video and interviews with people who lived and worked with Wilt during that magical summer, this documentary short reveals an unexplored and pivotal chapter in the life of one of basketballs greatest players, and a fascinating glimpse of a time when a very different era of basketball met the Borscht Belt in its heyday. 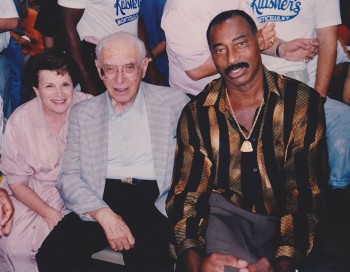