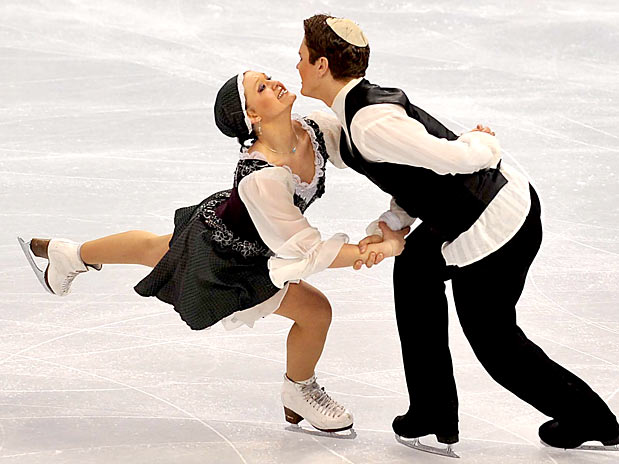 The Winter Olympics have started, and the Americans who travelled to Russia are already Kvetching. “What’s wrong with these Sochi toilets?” “Did anyone bring an extra lightbulb?”

Where have we heard this before?

Yes. It is a historical fact that in 1986 the world’s only Jewish Winter Olympics took place in Anatevka, Russia. And it was a sensational disaster. During the opening ceremony, the near-sighted athlete carrying the Olympic torch mistakenly thought a tree was a Menorah and he lit it on fire. That is how the famed Uzbekistan forest became the desert it is today.

The competition featured some classic olympic challenges, as well as some uniquely Jewish ones. Let’s break down the competition and how the Olympians fared.

Trodging (a.k.a. walking two miles in the snow)

The opening game of the Jewish Winter Olympics featured every Olympian walking two miles in the snow. The finish line was the front doors of a school, where their principal “whipped them back into shape.”

The gold medal went to the Ethiopian team, who were more excited about seeing a school.

Schlopping (a.k.a. breaking ice for a Mikveh)

Contestants had to hop around stark naked armed with only a pickaxe, and cut a hole in the foot-thick ice, then climb in and perform the ritual immersion three times. A Rabbi standing on the side would then shout “KOSHER” and eat a frozen bagel with lox.

Chaye Soreh Grendelwald of Yakutsk, Siberia won the gold medal. Following her victory, she announced that “all grandmothers the world over were a part of my win, and carry the obligation of pretending that they had broken a hole in the ice to go to the Mikveh!”

Kveezing (a.k.a. Kvetching about the cold)

This event featured athletes who were so competitive, that they continued Kveezing even after their medals were awarded. Matter of fact, some of them Kveezed all through the entire winter Olympics, and one athlete, the gifted Kveezer Sholem Ber Bloomingpants of Hungary, Kveezed so much that the KGB sent him to perform manual labor in the South Pole. Unfortunately, Bloomingpants was a Lubavitcher, and instead of languishing in the tundra, he opened “a vibrant Synagogue and youth program” in Chabad of the Antarctic.

No, this wasn’t an Olympic event. Everyone’s galoshes needed fixing, because that’s all Jews did in Soviet Russia in the 80s. Wear galoshes. And fix galoshes.

Team USA sent their Hasidic team from Boro Park. Five sleek, bearded men. All bespectacled, and slightly hunched over. Their wives had packed tuna sandwiches, and they had brought their own custom bobsled (or as they preferred to call it, Baruchsled). The back of the bobsled was fitted with two double strollers, three carseats were stuffed into the middle of the bobsled, and a Hatzolah siren outfitted on its front.

The Hasidic team were on their way to setting a world record for speed, when one of their fur hats was swallowed by a starving Russian eagle. Toward the end of the run, a Hasidic spectator suffering from amnesia threw a rock at their Baruchsled, mistakenly thinking they were driving on Shabbes.

Instead, the gold medal was awarded to the Israeli team led by Nimrod Atari, a former Tzahal Air Force pilot, who sped through to the finish line. Unfortunately, his instincts also kicked in, and he rained missiles all over the track on his way down, disqualifying all the other teams and spraying several snowflakes on spectator Gloria Goldstein’s Gefilte fish spread. Ms Goldstein got her money back.

Team Russia put up a strong fight, sending a group of Jewish housewives with experience cleaning for Passover. They swept the entire curling arena in a matter of minutes, and then shouted at their children for walking across the curling sheet in muddy shoes.

Instead, Team Canada collected gold, after sending a team of Jewish Accountants who spent hours figuring out exact angles and sums before each slide. They later apologized for the win.

The ice hockey competition was cancelled after an unfortunate incident when a group of Jews crosschecked a man and nailed him to the boards.

A new world record was set in the speed skating competition when Russian athlete Yakov Lulov heard that the KGB had rung his doorbell. He skated so fast that he landed in Brooklyn, New York, where he subsequently became a taxi driver/rocket engineer.

The Hasidic team from Boro Park opened the ceremony with a moving performance to the song “Moshiach Moshiach Moshiach” where they danced in a circle for an hour. They were followed by the Israeli team, who performed a Hora to the tune of “Hava Nagilah.”

The winner of the gold medal, however, was the Canadian team, who lifted a Bar Mitzvah boy on a chair for 12 minutes to the tune of Madonna’s “like a virgin.” Spectators were encouraged to throw candies at the Bar Mitzvah boy.

Are you crazy? You want me to get killed?

This spectacular event was won by a non-athlete. Musician Berl Gatkiss was innocently playing his fiddle on the roof of his hut when a slight breeze knocked over the frail Jew. He slid all the way down the mountain and was awarded the gold medal. When asked what he plans on doing with the medal, he responded, “marry off my three daughters, who are all single.”

The Biathlon is the toughest challenge of the Winter Olympics, wherein athletes must race on skis to platforms  while carrying rifles, after which they must shoot down five targets.

Wladislaw Wruwrewczwewczky of Chelm, Poland took a quick lead in the cross country ski race after which he continued past the finish line and got shot in the face by a fellow Pole from Chelm.

The Iranian team were disqualified from the Biathlon after it was discovered that their guns had been upgraded to shoot heat-seeking SCUD missiles. Not one of their missiles hit a target.

The Jewish Winter Olympics closed with a magnificent performance by “Delilah Schwartzman,” dressed provocatively atop a mountain. However, her clothing infuriated the American Hasidim, who shoved her into a luge mid-performance, and sent her racing down the luge run, which featured some sloppy handiwork. Instead of speeding to the bottom of the mountain, she hit a large bump and sailed all the way over into a nuclear reactor near the town of Chernobyl.

And that was the first and last time anyone ever heard of a “Jewish winter Olympian.”