Max It Magazine – New Episodes of Jewbellish: The Show

Lubavitch Comedian Mendy Pellin is at it again with new episodes of “Jewbellish: The Show”. 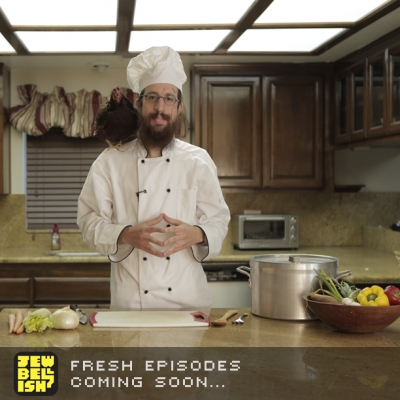 Mr. Pellin, whose work has racked up over two million views on YouTube, is the force behind “Jewbellish: The Show”, a sketch comedy web series sponsored by humor/alt-culture site Jewbellish.com. “I’m really excited about this show,” says Mr. Pellin, “because it gives me an opportunity to push the boundaries of my comedy beyond my traditional audience.”

“Jewbellish: The Show” premiered on the web in late March with three Passover-themed sketches. The show recently wrapped production on four new sketches that are scheduled for release next month. They feature Mr. Pellin as the host of a cooking show.

Mr. Pellin’s producing partner, Arnon Z. Shorr, remarked on the new material, “I’ve been working with Mendy since 2010, and I think this is some of our best material.” Mr. Shorr, who directs some of the episodes, also writes the “Musing Pictures” column for Max It Magazine.

With the new sketches just entering post-production, the Jewbellish team is already at work preparing eight more sketches for an early-summer shoot.

For more information about the show and its sponsor, visit www.jewbellish.com

via Max It Magazine – New Episodes of Jewbellish: The Show.